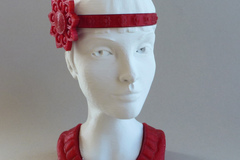 <p>I've started sculpting base meshes which are fairly generic and can be used a a framework for future models. This shouldn't result in my work looking "samey" (well, I hope not) but it will save some time. For this entry, I shall focus on human faces' which unless very deformed (or have non-human elements added), follow a basic rule of proportion. I decided to start with a female head, neck and partial shoulders (what is also known as a bust) as there is a very complicated model I want to make in the future and I'd like to get practised with as many components as I can in advance.</p><p>The theme I chose for this model is the Flapper. Here is a poem I found which describes the idea fairly well:</p><p>The New Fashioned Girl</p><p>Let them sing of the girls of the long, long ago,<br>Who were shocked if their elbows or stockings did show,<br>But I'll chant of the maidens whose ankles are free,<br>To show their half-socks and the shape of their knees,<br>Let them praise those back numbers who turned in their toes<br>And panted and fainted when MEN would propose;<br>Compared to the short-haired, bob-headed fry<br>Who meet all proposals with right to the eye.<br>Let them shed all their tears in a crocodile pour<br>For the simple simp sister who flourished in yore<br>But I'll cast my vote in the way that I feel -<br>For the girl self reliant, bright, snappy and REAL</p><p>--Unknown</p><p>You can read about this in my blog:</p><p><a rel="nofollow" target="_blank" href="http://www.southquay3d.com/index.php?route=news/article&amp;news_id=17&amp;quot">http://www.southquay3d.com/index.php?route=news/article&amp;news_id=17&amp;quot</a>;</p><p>This model when fully assembled is 14cm tall. She prints support free.</p>
Creative Commons Attribution Noncommercial Share Alike