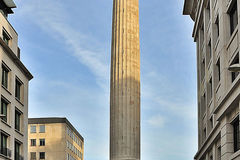 <p>In September 1666 a fire swept through London for 3 days destroying thousands of buildings. A monument to the fire, known by Londoners as "The Monument" was erected one block from where the 3D print show will be held this year exactly 348 years since the fire was extinguished. <br>I won't be able to get to the show this year, but if you do, you can climb the 311 steps inside the tower on a cantilevered staircase to the viewing platform. Or, you could just print one and look at it ;)&nbsp;<br>From Wikipedia: As part of the rebuilding, it was decided to erect a permanent memorial of the Great Fire near the place where it began. Sir Christopher Wren, Surveyor General to King Charles II and the architect of St. Paul’s Cathedral, and his friend and colleague, Dr Robert Hooke, provided a design for a colossal Doric column in the antique tradition. They drew up plans for a column containing a cantilevered stone staircase of 311 steps leading to a viewing platform. This was surmounted by a drum and a copper urn from which flames emerged, symbolizing the Great Fire. The Monument, as it came to be called, is 61 metres high (202 feet) – the exact distance between it and the site in Pudding Lane where the fire began.</p>
Creative Commons Attribution Share Alike