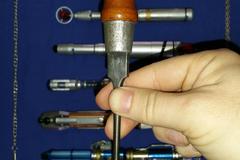 The Next Doctor's Sonic Screwdriver

Jackson Lake's sonic screwdriver from the *Doctor Who* 2008 Christmas special, "The Next Doctor". ("Well, it makes a noise.... *[taps screwdriver against door frame]* ...that's sonic, isn't it?") No sonic screwdriver collection is truly complete without The Next Doctor's! I've also included hollow versions for those who use 3D printing services that charge by volume, in order to make them less expensive. Modeled in Blender based on screenshots from the episode.
Creative Commons Attribution Share Alike