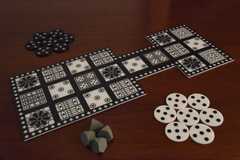 The Royal Game of Ur (ancient board game)

_Echoes of strategies throughout the eons challenge you to epic duels._ A two-player race strategy game played at least since five thousand years ago. The first boards were discovered at the Royal Cemetery of Ur in 1922 (this is where the game got its name from) and the rules were deciphered several decades later from Babylonian clay tablets. The board pattern design closely follows the specimen pictured here: https://en.wikipedia.org/wiki/Royal_Game_of_Ur#/media/File:British_Museum_Royal_Game_of_Ur.jpg and is optimized for a 0.45 mm perimeter width. A modular board design helps with capturing the fine details of original design, as larger individual tiles can be separately printed even on smaller beds; additionally, the tiles can be easily stored. ####Game Rules#### Each player takes a set of seven pieces. Every piece must enter and exit from the board at specified locations. The first player to move all their pieces off the board wins. At each turn a player rolls a set of four tetrahedral dice to determine the number of squares a piece can move. Each die has two marked sides*, corresponding to 1, and two unmarked sides, corresponding to 0, so each roll yields a number between zero and 4. When a player rolls the dice, they have the following options, of which they must choose only one: introduce a new piece on the board, move a piece already on the board along its path, or move a piece off the board. Note that a piece can exit the board only if the player rolls the exact number that would bring it off the board (number of remaining squares + 1). If no move can be made, the player loses their turn. Every square can only be occupied by a single piece. A player cannot place multiple pieces on the same square. However, a player can move their piece to a square occupied by an opponent’s piece: in that case, the opponent’s piece is ‘captured’, i.e. it is removed from the board and must start anew. Rosette squares (the flower shape) are special: when a player moves a piece to this type of square, they get an extra turn. Moreover, pieces on rosettes are safe from capture; an enemy piece cannot move to an already occupied rosette. There are two possible game paths, and which one is used must be agreed upon before the game begins. For more information on playing The Royal Game of Ur, visit: https://www.youtube.com/watch?v=WZskjLq040I *The original game calls for tetrahedral dice with two of the corners of each die bearing colour markings. This would not work on a single nozzle printer, so we opted for truncated tetrahedra with slight insets on two of their triangular faces.
Creative Commons Attribution Noncommercial Share Alike