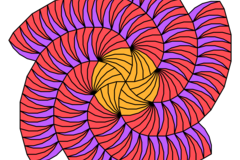 Tiling the plane with the versatile tile

This is part of the series of 30 exercises developed during the 3D4KIDS program. One of the aims of this Erasmus+ program is to improve the knowledge of teachers regarding the 3d printing technology by developing some specific training materials. More info in the website: https://www.3d4kids.eu/ The activity is about tiling the plane with the tile known as the 'versatile' and other similar tiles. There are infinitely many ways to achieve this. Some of them are called periodic and other are called aperiodic. Two kind of tiles are used in the exercise. Tile number 1: Versatile The sides are all of the same length. The tile can be built attaching an equilateral triangle and rhombi with acute angles of amplitude 45, 30 and 15 degrees as shown above. Several tilings of the plane are shown as example (the first one is periodic and the next two are aperiodic). Tile number 2: Another kind of tile similar to the versatile, this time symmetric. It is obtained by removing a part of the regular decagon. The angles of the tile are shown in the figure above.
Creative Commons Attribution