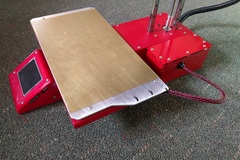 Brook and the folks at Printrbot were nice enough to donate an early version of the Printrbot Pro to me so I could refurbish it for a local school. The Robotics club at Como High School wanted the printer, but I wanted to give the printer a few upgrades. I added a touchscreen with Wifi control (via the MKSTFT 28, and the MKSTFT-WIFI). I also added a Mains 200W Heated Bed via an SSR in a small "Sidecar" enclosure. The printer Brook donated used one of the F5 Printrboards instead of the G2 board used in the production Printrbot Pro printer. So in order to get Serial (Tx/Rx) working on the F5 board I had to compile the firmware with some edits. I have included both the hex file I used for the F5, and my Marlin folder which includes the edits. I also had to solder pins onto the F5 board to get the TxRx outputs in order to run that up to the touchscreen. The touchscreen can be run off 5V or 12V. With the Wifi board connected 12V is recommended. You can find a bunch of information on the touchscreen here: https://github.com/makerbase-mks/MKS-TFT I like the touchscreen a lot because you can edit the graphics via tools provided on the makerbase github. There is also a text file that you can edit to customize buttons and macros on the LCD to suit your own tastes.
Creative Commons Attribution Share Alike