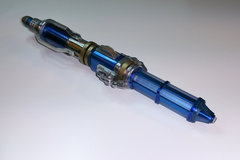 <p>My attempt at modelling the Twelfth Doctor's new sonic screwdriver, introduced in the episode "Hell Bent".<br></p><p><br>Yes, there's an absurd number of parts to it. I separated into multiple parts for ease of painting and to try to eliminate overhangs. Although I separated the latches into each individual component, I also included a "prebuilt" version (though I don't think it looks quite as good when printed).<br><br>It's hollow most of the way through, in case you want to include electronics, and unscrews at a couple of points to facilitate that.<br><br>In addition to the 3D printed parts, you'll need five lengths of 5mm-diameter clear acrylic rods, and several short bits of 2mm-diameter brass wire to hold the latches together (unless you use the unibody versions). See the "build instructions" document for complete details.<br><br>The fit will be extremely tight when it comes off the printer, as it is intended that the parts be sanded down to get rid of the layer striations before painting them.<br><br>Printed on my Ultimaker 2 with the following settings: Layer height 0.1mm, Shell thickness 0.8mm, Bottom/Top thickness 0.8mm, Fill density 25%, Brim (5 lines), Nozzle size 0.4mm, Print speed 50mm/s, Top/Bottom speed 15mm/s, Outer shell speed 30mm/s, Inner shell speed 40mm/s. Took just under 10 hours (printing all parts at once), using a little under 5 meters of filament.</p><p><b>PLEASE NOTE</b>: the original version that I uploaded worked fine in Cura, but other slicers (and the 3D preview here) interpreted the parts at 1/1000 of the intended scale. That issue has now been fixed.</p>
Creative Commons Attribution Share Alike