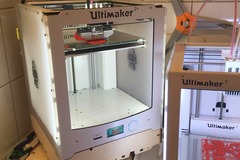 Video: https://youtu.be/KAb72YMDQDw UPDATE 2: - added Ultimaker 3 version UPDATE: - added screw holes for the huge ball bearing (see the last image) - added thermal exhaust ports on the side panels for cooling (and those damn rebels) Not many are lucky to have enough space behind the printer. Me neither and I got sick of the weird Yoga dance I performed every time I wanted to change filament or access the back of the machine. This swivel base allows the printer to rotate around its own z-axis. It needs a swivel base ball bearing (German: "Druckkugellager"). The power cable is routed through holes on the top of the base and the front/back. There is no mechanism to stop you from rotating this thing past 180° (and potentially damaging the power cable), so be careful and use common sense. The base consists of three distinct parts. Top, side and front-back. For a complete set you need to laser-cut and assemble: 2x top 4x side 4x front-back Variants: Next to the regular version there is another one with a cutout on the front-back. This makes for a nice drawer for tools and other small parts. Just make sure they don't get in the way of the power cable. Then there is a "low profile" version which is just thinner. This version has another variant with a cutout on the front-back. It is very narrow and might now work as a drawer but it would be enough room to store your sd cards in there :) Instructions: You basically create the same base twice and connect both pieces to each other through the swivel base ball bearing. When connecting the pieces, you need to drill holes through the top in order to attach the ball bearing (if the existing ones do not fit). Depending on the ball bearing you buy, there might not be enough clearance between the base parts. In this case, use some leftover plywood parts to put beneath the ball bearing. Also take note where the holes are and drill holes into the top part. Remember that once you have attached the ball bearing to one base, as soon as you put the other base on top, you won't be able to screw the bearing to the top base part. That's why you need to drill holes which are big enough to get your screwdriver through from the bottom. See the image with the ball bearing to get the idea behind this.
Creative Commons Attribution Share Alike