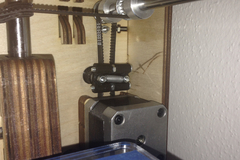 The tightener can move freely along the belt. Flanges on the roller parts keep the assembly from falling off. Attach small pieces of felt to the faces touching the steppers or the walls if you encounter rattling or rasping noises.<br><br>Hint: Save the nuts and glue the guide bar screws into one slider part.<br><br>Print at 0.1mm layer height, 1.2mm wall thickness and 20% infill. Clean bores after printing to let the sliders move smoothly along the guide bar screws. Tighten the roller screws to a loose fit to let the ball bearings move freely. Check for smooth-running of rollers and sliders before attaching the tighteners to the belts.<br><br>Snap on the belt tighteners onto the short belts and make sure the flanges are embracing the belts at the side facing the walls. If the belt is too close to the wall, re-adjust the pulleys to have 1-2mm clearance from the walls. The rollers should barely touch the walls but not scratch them.<br><br><br>Update:<br>I received some feedback on concerns about adding a spring to the drive system, which could introduce negative effects on the system's dynamical properties.&nbsp;I generally agree, but I think these concerns do not apply here. The sprung system is not supported by the non-moving frame, that's the small but nice trick of this design. Directional changes of the belt movement will not cause the spring to be deflected and store/release energy. If one piece of the belt is tightening, the opposite part will loose the same way, so the tensioner assembly will slightly move laterally, but the spring will not see any deflection. There is no dynamics in the tensioner length at all, the spring just applies "static" stress to both belt parts symmetrically. Fixing one part of the tensioner body to the frame indeed would introduce ringing and overshooting on directional changes.<br><br>Update 2: <br>Minor changes to roller part. Flages extended to prevent tensioner occasionally falling off. Larger bore for screw head to fit an additional washer for reduced friction between the roller and the screw.
Creative Commons Attribution Share Alike