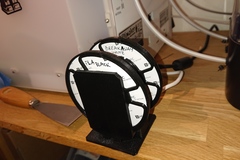 I permanently store filaments in dry boxes. It makes the original spool holder redundant. I had removed it but wanted to keep possibility of using NFC tag functionality with Ultimaker materials. For that purpose I designed two accessories: 1. an NFC tag holder (see a separate design) for easy handling and storing of NFC tags removed from material spools. 2. the described here matching housing for the NFC reader. It allowed me to move the reader to a more convenient position and take a full advantage of the NFC tags in the holders. I assumed that it should be possible to reverse changes and return the printer back to the original status. The holder originally was designed for hanging at a top edge of a printer side panel. Unfortunately the original connecting cable is too short. I tried to produce a longer replacement cable but run into problems with finding a fitting 10-pin mini DIN connector. As a "plan B" I designed a base which makes possible placing the housing next to a printer when using the original cable. As a result both options are now possible. You can hang it (if you extend the cable) or place it next to the printer.
Creative Commons Attribution Share Alike