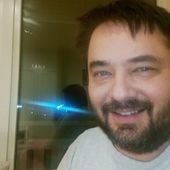 A storage box for an UM3 print core. Protecting and organizing print cores. Easy to access. It can be hanged at the printer.

My intention was to design a storage box which protects a print core and at the same time gives an easy access to it. It is designed to be hanged at a side of a printer.
Multiple boxes can be stacked side by side for storage of multiple print cores.

NOTE: I printed the parts using double extrusion. However it should be possible to print them with one extruder/material only. The box halves do not need supports, the lid needs supports.

Additional materials:
- transparent plastic or foil 16mm x 22mm, thickness up to 1mm,
- glue, I used vinyl acetate polymer glue (Pacer Formula 560) for the "window" and CA glue to join the halves. In general a CA glue should do both jobs fairly well.
- optional tube or rod diam. 2mm, 3pcs with length depending on a number of stacked boxes,
- optional double sided adhesive tape.

Assembly:
Two halves should be glued together. The swinging lid has to be in place during the gluing (it is rather difficult to snap it into position after the halves are glued).
The transparent piece should be glued in the "window" of the lid (at the inner side).
There are three through holes which can be used for positioning and connecting couple of boxes together with diam.2 pins.
I hanged the boxes on an upper side edge of the printer. It may be good to use pieces of double sided adhesive tape to secure them to the printer side wall. Otherwise you have to be careful not to knock them of the edge.
The easiest way to open the lid is to hold it down with an index finger at the oval recess and pull up the tab at the short edge with a thumb (see one of the pictures).