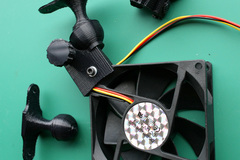 Originally shared 22nd June 2012 -&nbsp;<br><br>I have been using fans on and off for about the past year when printing in PLA, I'm really keen to understand how fans help with the build process, so in an attempt to learn more I wanted a mount I could direct airflow across, along, and even cyclone around my printed objects.<br><br>I used the ball joints from the great Fully printable PCB Vice by Sneakypoo as a great starting point for this design.<br><br>Print the parts, and decide if you need a Vertical or Horizontal mounted fan bracket.<br><br>Assemble and mount to your printer, tighten nut and direct air around / over your printed object.<br><br>More info on My blog post here -&nbsp;www.<a target="_blank" rel="nofollow" href="http://richrap.blogspot.co.uk/2012/06/ball-joints-fans-rpi-hearts-and-fairy.html">richrap.blogspot.co.uk/2012/06/ball-joints-fans-rpi-hearts-and-fairy.html</a><br><br>It's a work in progress as I intend to experiment with the use of fans (many) with objects being printed.
Creative Commons Attribution Share Alike