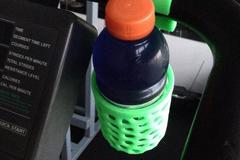 <p>I wanted to accomplish two things with this project: Learn how to make a voronoi patterned thing and make a bottle holder for a gym machine that lacked one. I found that the cup was pretty versatile, though, and could be used for several things, including a simple pen holder, so I've actually printed quite a few of these. The only one I haven't printed is the one that doesn't have a flat bottom so I don't know if that one can be printed successfully or not.<br></p>There are a lot of files, but you don't need them all to make something. <br><br>A simple stuff holder for a gym machine: stuff holder.stl, extension.stl (not necessary - just adds a small bit of extra length if you need it), back for thin hook.stl, thin hook.stl <br>A voronoi bottle holder for gym machine: extension.stl if you need it, thick hook.stl, back for thick hook.stl, cup without bottom and no support.stl, extension for cup.stl <br>A bicycle bottle holder: cup with bicycle mount holes.stl <br>A lamp: cup with support.stl <br><br>The "cup with support.stl" was actually my attempt to make this printable without heavy support, but this produced something with support that couldn't be removed. It makes a pretty lamp, though, so a lamp it is. <br><br>The cup (any version) can be printed without support. It will only sag a little bit (hardly noticeable). I never did make another version with supports because in the end, I was actually reasonably satisfied with the unsupported prints. Picky people may want supports, though.&nbsp; I've shown this print at a presentation and only the pickiest of people with previous design experience really cared about the droopiness, but when I explained that it was printed without support, they suddenly became very happy.<br><br>THE CUPS TAKE SEVERAL HOURS TO PRINT. Also, be careful of your choice of materials if you intend to actually use the print to hold a filled water bottle. Make sure you use a strong plastic (i.e. don't use one that has been weakened by whatever dye was put in it). The green one I have in the pictures broke at the hook but I made a replacement black one that has been holding up well and the only difference is the dye. The green one is glow-in-the-dark. Don't use that. The one on the bicycle is also glow-in-the-dark but it doesn't have a hook that has to experience the same forces as the one that broke, so it has held up well.
Creative Commons Attribution Noncommercial Share Alike