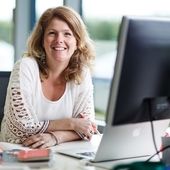 Learning more about physics, by using your 3D printer

Number of students:
Annually an average of 150 pupils attend the course distributed in 15 groups

Related subjects:
The world around us, Nature and society, Mathematics

Project description:
In the next year, mankind will mark 280 years since the death of Sir Isaac Newton, scientists who laid the
foundation for understanding the world around us. Newton's laws of motion are three physical laws that,
together, laid the foundation for classical mechanics. They describe the relationship between a body and
the forces acting upon it, and its motion in response to those forces. They have been expressed in several
different ways, over nearly three centuries, and can be summarized as follows.
First law: In an inertial reference frame, an object either remains at rest or continues to move at a constant
velocity, unless acted upon by a net force.
Second law: In an inertial reference frame, the vector sum of the forces F on an object is equal to the
mass m of that object multiplied by the acceleration a of the object: F = ma.
Third law: When one body exerts a force on a second body, the second body simultaneously exerts a
force equal in magnitude and opposite in direction on the first body.
Using 3D printed parts, pupils construct water or heat-propelled engines from soft drink cans and other
thing in everyday use. They test the engines and the variables that affect the action-reaction of the
engines. We will make at least the following three experiments:
Pop Can

“Hero Engine”
Small pupils teams will construct water propelled engines out of soft drink cans and investigate ways to
increase the action-reaction thrust produced by water shooting out of holes punched in the can sides.

This activity simulates the operation of the classic aleoliphile engine invented by Hero of Alexandria more
than 2,000 years ago. Hero’s engine was a spinning copper sphere that was propelled by a thrust
produced by a jet of steam. The engine was an early demonstration of the action-reaction principle (third
law of motion). Steam, shooting out through two L-shaped holes, creates an action force that is
accompanied by an equal reaction force in the opposite direction.
In this activity, a Hero engine-like device is created by the pupils. Holes are punched in the side of a soft
drink can. The holes are angled pinwheel fashion. A string, tied to the pull tab, supports the can and
permits it to rotate. The can is immersed in water and pulled out. Gravity draws the water through the
angled holes, and streams shoot out in either a clockwise or counterclockwise direction. The streams
produce an action force that is accompanied by a reaction force. The can spins in the opposite direction.
Part of which will contain nozzles we will make using 3D printing. We will vary the construction and mass
of part contain nozzles, nozzles, ... Different designs will be evaluated by actual number per minute.

Hero's steam engine
This is heated variant of previous engine. Heat to generate the steam had to be applied externally. As
the water heats up, the molecules of water move faster. When the water boils, the molecules are moving
too fast to stay stuck together as a liquid, and they move about freely as steam. The fast moving water
molecules are bouncing around in the can, hitting the walls of the can from all directions. Because they
hit the top as often as they hit the bottom, the can neither moves up nor down.

But there is one direction in which the molecules don't hit anything. This is the direction where the holes
in the tubes are. Instead of hitting a wall of the can, the molecules hit nothing, and exit out into the air.
The molecules in the can are pushing on all the walls the same amount, except where the holes are.
Because nothing is pushing in that direction, there is nothing to hold the can back, and it moves away
from the holes in the tubes. When the fast moving molecules of steam leave the nozzles, they spread
out in all directions as they run into the slow moving air molecules outside the can. What you feel with
your hand is the steam molecules that have slowed down in the air, and the air molecules they bumped
into and caused to move. Not only have they slowed down by the time they hit your hand, but they have
spread out so they don't all hit the same place. The combination of moving slowly and spreading out
makes them feel cool on your hand.
Rockets and jets move the same way. A rocket can work in outer space because it does not need to
push against air or the ground. It works because the molecules inside the rocket are pushing in every
direction except out the back. Our steam engine works because it has two rockets (the brass tubes)
pushing the sides of the can in opposite directions, causing it to spin.
Part of which will contain nozzles we will make using 3D printing. A special challenge to the students will
be connecting hot and printed parts. We will vary the construction and mass of part contain nozzles,
nozzles ... Different designs will be evaluated by actual number per minute.

Steam powered boat The boat is a plastic recycled bottle cut in half lengthwise or 3D printed body shell. Near the bow of the boat is a small candle. The aluminum cup keeps the melted wax in place, so the boat can go for hours. Small amount of sticky tape is used to keep it in place. The engine is made of 1/8 inch soft copper tubing normally used in refrigerators. The copper tubes must be full of water, and both open ends must be under water. The easy way to fill the tubes is to hold one end under water, and suck on the other end. When the tubes are full of water, and the boat is resting in the water with both ends of the tubing under the water, light the candle. When the coil of copper tubing is hot enough to boil the water inside, the boat will jerk ahead suddenly, then start moving evenly forward. Water in tubes little pulses, about 5 or 10 pulses
per second. These pulses are pushing the boat along. The holes in the soft plastic will close around the tubing, forming a water-tight fit. At the ends of copper pipes will be mounted 3D printed nozzles. A special challenge to the students will be connecting hot and printed parts. We will vary the construction and mass of the vehicle, engine design, the shape of nozzles ... Different designs will be evaluated by velocity (the time required to cross certain path).

Balloon powered vehicles We will build a small vehicles that will run with compressed air from a balloon using various materials, mainly used packaging. We will vary the mass of the vehicle, the pressure in the balloon, the shape of nozzles ... Using 3D printing we will get coupling elements, nozzles ... Different designs will be evaluated by velocity (the time required to cross certain path).

Marcella published this design over 3 years ago