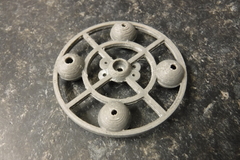 A device that makes a noise without the use on batteries, that's small light and portable. This device makes use of resonance in a cavity. As its an acoustic device we need to provide it with air. But rather than applying the air by blowing into it we will propel the device at high speed to force the air. Propulsion at high speed is provided by a wound string. By pulling the ends of the wound string in opposing directions it causes the string to unwind and propel the spinner. Once the string has unwound the rotational energy causes the spinner to wind the string in the other direction. Unless energy is fed back into the system by again pulling the string the process would eventually stop. Operation Before use and periodically during use check that the spinner has no issues and that the string is not fraying. If any issue are found better to reprint a new spinner and to re-thread with a new string. As a precaution wear eye protection in case there is a failure of the spinner or the string should snap. Without handles: Stretch out the string loop to form two parallel lines with index and middle fingers of each hand looped through the turns at the extremes Clasp the string in closed fingers. With handles. Stretch out the string loop to form two parallel lines clasp the handles in closed fingers. The rest of the process is applicable to either method. Centre the spinner along the string so as to be positioned equidistant between your hands by sliding along the string loop. Hold the string loosely with forearms parallel such that the spinner and string form a "V" shape with the spinner at the bottom of the "V". The string is tensioned by rotating both hands in unison (creating small arcs), maintaining the "V" shape (as far as possible); as the string tightens it should shorten as it is wound. Once the string starts to produce kinks, it is would sufficiently. At this stage maintaining parallel forearms pull your hands outward away from each other. The spinner will start to spin unwinding the twist previously applied whilst simultaneously whistling. Once unwound the momentum will cause the string to wind its self in the opposite direction but at the same time losing momentum and slowing down. During this stage relax the opposing pull between your hand and pull them apart again causing the spinner to rotate in the opposite direction picking up speed in the process. Repeating the process with a smooth co-ordinated action will keep the spinner rotating and whistling. It may take a little practice the get the spinner to rotate. It's also a good exercise for your arms. Further details can be found here: https://www.instructables.com/Orbital-Sound/
Creative Commons Attribution Noncommercial Share Alike