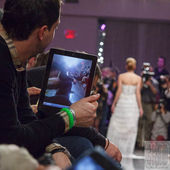 The Ulti-BotBot is a submission by XYZ Workshop that won 6th place in a 3D Toy Design Competition organised by GrabCAD and Ultimaker. The Robot features articulated arms, body and a tank track made from flexible PLA. Most distinctively it features a chocolate cannon launcher.

The Ulti-BotBot is a submission by XYZ Workshop that won 6th place in a 3D Toy Design Competition organised by GrabCAD and Ultimaker. See results of the competition at http://grabcad.com/challenges/ultimaker-3d-printer-toy-design-challenge/results

See the robot in action


We wanted to push what we could do with the Ultimaker 3D printer, and we wanted to design something that was heavily articulated and not merely a static toy.
Inspired while watching the Octonauts cartoon with our son, our early sketches for a toy came about as a robot tank, with articulated arms that would pick up objects and collect them on its back. It would then poop the objects out through a rear hatch.
The initial concept of the robot, was to pick up purposefully designed 3D printed objects. However, it then struck us that it would be cool and less of a choking hazard if the robot picked up chocolate snacks instead.
Maltesers first came to mind as the perfect object to be used, as they resembled mini cannon balls Alas, upon testing, they were of the wrong scale and proportion to our design. This realization was followed by a series of rigorous testing and experimentation of different chocolate confectioneries. Our extensive research lead us to conclude that using something smaller, namely M&Ms, Skittles or Smarties would be more appropriate. The best thing was that nobody went hungry during those late night experimentations.
As the design developed, the thought came to us, what if it could shoot out chocolate confectionery from its very own cannon? We then designed a working chocolate cannon, utilising the spring from an ordinary pen.
Forget all those negative press about people building their own 3d printed guns. Why not build your own 3d printed chocolate cannon! This is chocolate warfare about to be taken to the next level!

The Ulti-BoBot is approximately 126mm wide,104mm deep and 155mm in height (excluding the cannon and arms).It is made up of a total of 37 assembled parts. (Not including the Ultimaker figure and spring). It was printed using a combination of flexible black Ultimaker PLA, silver and yellow Ultimaker PLA.
Most of the parts are designed to snap together. The articulated arm's ball and socket joints were printed at 150 micron on a raft. We had to slow the print down to 15mm/s as the head kept knocking the delicate socket legs off.
The main body, claws and control cockpit were printed with supports turned on. This ensures the moving joints would be printed properly. Extra care is required when trying to loosen the pin joint of the main body's rear hatch.
The tank tracks were printed using Ultimaker's flexible PLA. This was printed at 200 microns and reduced to 15mm/s speed.
The spring used for the cannon is from a uniball jetstream click pen. It's external diameter measures 4.5mm and 28mm long.

Jari added this to the SPIELZEUG collection about 1 year ago

Jari added this to the SPASS, PUZZLE, SPIELE collection about 1 year ago

Arny56 added this to the Toys collection almost 2 years ago

skettymon added this to the fun collection almost 3 years ago

ProjectCentral added this to the ROBOTICS collection about 3 years ago

g33zer added this to the Toys collection over 3 years ago

calebpike added this to the Models collection almost 4 years ago

XYZWorkshop published this design over 6 years ago