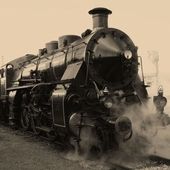 Here´s a nice model of a Ford 427ci Cobra V8 engine for your dektop.
I found a very detailed CAD database of this engine on GrabCAD. After scaling the model down to around 20% of it´s original size I started the CAD preparation and meshing work (around 100 hours of preparation time) to get this highly detailed model of this legendary engine. The transmission with bellhousing and shifter linkage is also included. As you can see, the modell consists of a large number of
single .stl files (very high polygon 0.5 - 1mm meshing size). That give you the ability to use different colors while printing the parts. Or you can paint the parts before the assembly starts. After printing you have to glue together the parts to get this amazing engine model. Some parts are a little tricky to print! You should have some experience with your printer! See "Print Settings" for some tips!

Now have fun with this amazing model engine!!

If you like this model Kit watch here:
https://www.printable-3d-models.com/de/3d-druckbarer-bausatz-vw-kaefer-bus-buggy-motor.html

You have to print the files:

In most cases you can use the standard resolution of 0.1mm.
Some parts needed a little higher resolution of maybe 0.06mm.
these are:

The spark wires should be printed upsidedown (terminals which are going to the rotorcap touching the buildplate). Here you have to mess around a little with your support structure settings (overhang angle 30 degrees?!?).
Use the position as provided in .stl file for the headers. Also have a closer look to the support settings.
The part throttle_linkage.stl should also printed upsidedown!

Use the rendered images for assembling the engine!!!

the part crankshaft_end.stl is positioned on the lower timing cover (the crankshaft part sticking out of the front of engine). The vibration damper is mouted on this part.

The rest should be clear. If you have questions about assembly, please Email!!

unsouledwilson added this to the Cars collection 7 months ago

rcken added this to the Models collection over 1 year ago

bwbuzzard added this to the Engines collection over 2 years ago

ltmhenrique added this to the Auto collection over 4 years ago

mafiltenborg added this to the Engines! collection over 4 years ago

rowiac added this to the Vehicles collection about 5 years ago

stuartjw added this to the engines collection over 5 years ago

Michael Smith Jr. added this to the Personal collection over 5 years ago